Route 66 is one of the most popular driving destinations in the world. It was one of the first highways established in the states, starting in Illinois and ending on the shores of the Pacific in California; being a length of an astounding 3940km (2448 miles). The dream of driving a Harley Davidson through the scenic route is an incredibly sought after experience, but unfortunately a very expensive one. For this reason, many British driving enthusiasts have taken to more local routes throughout the UK, and were in disbelief when they found out about the equivalent in Scotland, which some are coining, the “Scottish Route 66”. The real name for this route is the North Coast 500, which both starts and ends at Inverness Castle, giving access to beautiful scenic views and healthy roads throughout the Scottish highlands! The views really are remarkable! 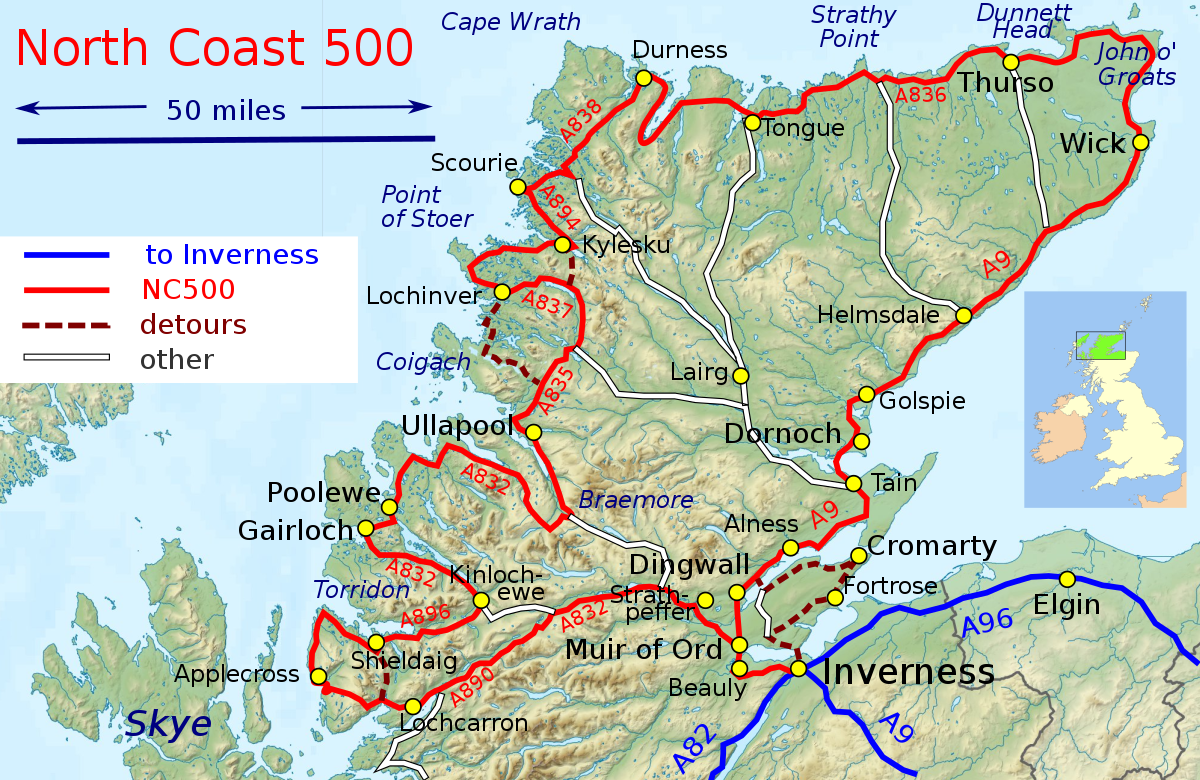 Where Does The North Coast 500 Take You?

The North Coast 500 was launched not long ago in 2015, with the intent of linking up all of the beautiful features of the Scottish highlands in one long route. The route will see the driver starting at the historical city of Inverness, and making their way up the coast to John O’Groats; which is famously known to be the most northern point of Great Britain. From there, the driver will move west across the coast to Durness, and then all the way south through to Gairloch, passing Ullapool and Poolewe on the way there. From Gairloch, the driver will travel south to Lochcarron, and then travel east to return back to Inverness.

How Long Does It Take To Do The North Coast 500?

Whilst Scotland is a fairly small country, this does not go to say that the North Coast 500 is a quick journey by any means. The route is said to take the driver at least 5 days if they want a good experience of driving through the Scottish highlands.

Why Is It Called The North Coast 500?

One can only assume that the North Coast 500 has been given its name due to having a length of just over 500 miles, (516) and progresses through the Scottish north coast.

When Is The Best Time To Visit?

According to www.northcoast500.com, the best time to take on this scenic route is in either May or October, when the weather’s beautiful and many shops/ restaurants will be open.

Check out our other blogs.

We use necessary cookies to make our site work. We'd like to set Google Analytics cookies to help us to improve our website by collecting and reporting information on how you use it. The cookies collect information in a way that does not directly identify anyone.
We also occasionally use cookies to serve advertising to our site visitors, on social media and search engines.
We won't set optional cookies unless you enable them. Using this tool will set a cookie on your device to remember your preferences.