For the past few years, the UK has put considerable effort into reducing the country’s carbon footprint as a whole. This is going to be done through multiple efforts such as switching drivers out to electric vehicles, becoming greener through electricity production, and reducing carbon footprint within industries. Recently, the UK Government has introduced what they are calling the ‘net zero strategy’, a strategy in which the government plans to deliver its emission targets by 2050 and have a 78% reduction from 1990 to 2035. These plans will have an incredible effect on the UK economy due to the fact that they will be decarbonising all sectors of the UK market.

The UK Government has said “Our overall assessment is that it is an ambitious and comprehensive strategy that marks a significant step forward for UK climate policy, setting a globally leading benchmark to take to COP26. Further steps will need to follow quickly to implement the policies and proposals mapped out in the Net Zero Strategy if it is to be a success.” 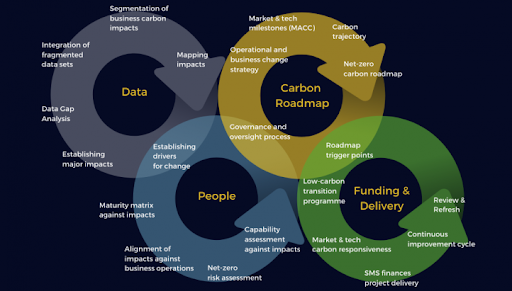 What Will The Net Zero Strategy Involve?

The Government will reduce emissions across the economy through increased emphasis on:

The transition will be supported through:

How Will The Net Zero Strategy Affect The Public?

The Government has stated “The public need to be involved—over half the emissions reductions we identified to reach net-zero actively involve people, whether by choosing to purchase low-carbon technologies like electric cars, or by making different choices, for example on their travel and diets.

This point was noted in a report by the House of Commons Business, Energy and Industrial Strategy Committee. The committee urged the Government to engage with the “public and other stakeholders early to ensure that detailed delivery plans accompany legislative targets in a timely fashion, building in the considerations of Climate Assembly UK”. The Government responded:

As we develop our plans for reaching net zero emissions by 2050, we will continue to engage the public on the changes that are needed to develop our ambitions on net zero. We will listen very attentively to feedback, including taking into account the recommendations of the Climate Assembly UK and the importance of public engagement with net-zero.